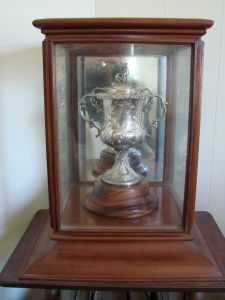 It having been decided by the southern residents to present Capt. Johnston with some token of appreciation of the enterprise shown by him in bringing out the Queen of the South to reopen the Murray mouth trade, some 20 or 30 of the principal residents and business men met Capt. Johnston in the reading room of the Goolwa Institute for that purpose on Tuesday morning April 23rd.

Mr. T Goode jun. [Mayor of Goolwa] in making the presentation referred in eulogistic terms to the great skill and perseverance shown by the Captain from the earliest period of the Murray trade, both in his endeavour to keep a fleet of steamers constantly plying from the seaboard to the heart of the country, though beset by many and great obstructions, and in his determination to keep the traffic through the mouth open, as evinced by his building and bringing out the Murray from home, though she proved unsuitable, also by his running out of his river boats whenever the weather was favourable, notwithstanding them being quite unsuitable for outside work. He referred to the many who had thrown the work up in disgust, in consequence of the many difficulties to be overcome – Cadell, King, the Murray Company and others. Captain Johnston however, though one of the pioneers, was still in harness and had fought hard and long, and he was glad to say successfully. He hoped now that he would reap the fruit of his labours.

Mr. A. Graham referred to the early history of the river trade, when Capt. Johnston and himself were servants of the “Murray Company“; and in illustration of the expansion of the trade remarked that all the steamers belonging to the “Company” who had almost all the trade to themselves, did not number more than those now owned by Capt. Johnston himself.

He especially drew attention to the advantage of concentrating the trade, remarking that though many supported the north west bend railway would injure Goolwa, he had found in conversing with those best versed in the matter, that the effect would be to close the many lower river ports such as Milang, Swanport, Mannum, Blanchetown, etc. all of which had helped to split up the trade, and to concentrate it at the two places; the lighter goods and passengers going by the railway and the heavier portions following the river to the sea.

Several of those present spoke of the Captain’s many acts of kindness and uniform courtesy during the many years they had known him.

The Mayor apologised for the absence of Mr. Fergussen, the local representative of Messrs McCullock & Co., who was “unavoidably detained at Victor“, and who had desired himself to express the high esteem in which his firm held Capt. Johnston.

Capt. Johnston, in feeling terms, expressed his inability to make a suitable reply as he was quite unprepared, not having had the slightest idea that such a presentation was to be made him. the pleasure that the acceptation of such a handsome gift gave him was not on account of its intrinsic value, but as showing the kindly feeling of his friends and fellow townsmen. He had always felt that there was a great future before the Riverina trade, and that feeling had materially helped him to persevere in the struggle for it. There was no country in the world with such advantages as to waterways but had made a name for itself, and he was proud to see the great strides the trade had made within the last two years. He thanked them very sincerely for the beautiful present before him, knowing that after his time had passed, his children would look upon it with pleasure and pride as a gift of their father’s friends.

The presentation consisted of a silver epergne mounted on a blackwood stand, the whole being nineteen inches high. The stem represents a fern, with its large leaves supporting the glass bowl. Round the stem are intertwined vine leaves and grapes. On the base are the figures of a blackfellow, with a spear in hand and two kangaroos. The following inscription is engraved on a silver shield-

Presented to Captain G. B. Johnston to commemorate the arrival of “The Queen of the South” at Goolwa and in recognition of his skill and enterprise in successfully navigating the Murray mouth and tributaries for so many years. Goolwa March 11th 1878.

This was surrounded by the names of the steamers owned and traded on the river by Capt. Johnston since his first start viz. Moolgewanke, Albury, Maranoa, Wentworth, Napier, and Cadell.