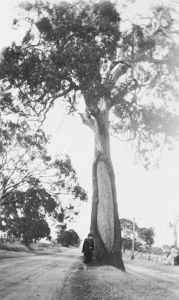 Noticed recently was tree lopping signage at Currency Creek on the Strathalbyn Road around the Winery Road intersection area as work was being carried out to maintain the old canoe tree by removing some of its decaying timber that is potentially dangerous to traffic passing under or near it.

The venerable old tree has seen much of our history passing by it. It was a fully matured tree when white sealers from Kangaroo Island roamed the vicinity followed by the visiting Sturt party’s seaside overnight stay at Goolwa. It would be the landmark passed by in the lights of Cobb and Co’s subsidiary Hill & Co, as they regularly carried the Royal Mail and passengers between Strathalbyn and Goolwa.

It bore witness to the horsemen of the Goolwa Volunteer Cavalry on their way to train with the Strathalbyn troops on Finniss Flat, and viewed the passing by of the Middleton horse-drawn tram on its Strathalbyn run. It would later have the startled birds in its branches put to flight by the hissing roar of the first steam locomotive rumbling by on the same nearby rails.

It stood in proud dignity as the surrounding fields were cleared of its fellow giant eucalypts of peppermint and red gum to nourish the newest human wave to settle the land and survived the frequent scourge of bushfires. Then one day a group of Ngarrindjeri people gathered around the smooth girth of this wonder of nature to admire its seamless trunk and to plan to carefully remove enough of its strong, healthy bark to make a canoe, but not endanger the life of the tree.

A couple of years ago, as I was going through my late sister Dora’s papers, I came upon a published account of a story of the actual removal of the tree’s bark to make the canoe. My family and the Shipway family have had a long, close association through making a living, church and day-to-day social activity, and with Dora being a lifetime companion and carer to Miss Lena Shipway of Myrtle Grove, Currency Creek.

It is a wordy account of an interview with Mr Thomas Shipway (1840-1923), a farmer of Clarendon and Currency Creek, who regularly travelled between the farms past this tree and observed the Ngarrindjeri shipwrights as they created the canoe. Thomas was born in England in 1840 and arrived in SA on the ship CHEAPSIDE in 1849. Beside being a blacksmith, and wheelwright, he took up farming in the Clarendon area and at Myrtle Grove at Currency Creek.

From the published account of the stages of removing of the tree’s bark, Mr Shipway’s interview with a reporter were later published but the clipping had no publication details but it did reveal part of the tree’s history of its scar.

“Near the junction of the old and the new roads to Goolwa, close to Currency Creek there stands a fine old gum, one of the giants of the district which a few lovers of old landmarks are anxious that the District Council of Pt Elliot should take into its care, and fence around, as it shows an immense cutting from its bark of an aboriginal canoe, said to be the largest ever cut by any of the Ngarrindjeri tribe, the expert of all the boat-builders of the river blacks.”

“Mr Thomas Shipway, of Clarendon, is one of the few people surviving who remembers the natives cutting this particular tree. The canoe was to be, he says, one of a very special size, the tree being a huge one with a specially fine thickness of smooth bark with few flaws, and a great of interest was taken by the natives in the work, which was carried on with diverse ceremonials and incantations”.

“Despite all the care, the unwieldy size of the slab proved the undoing of the hopes of the natives, for owing to lack of foresight in supporting as the cutting was nearly finished, when the final incisions were made the mass fell with a crash that split it right along its length, a fatal blow to its future perfection.”

“Old natives say that when a bark shape split while a canoe was being cut it was considered a bad omen, and the vessel was never used for any but close-to-shore purposes, though they were able to join up the bark at the seams with fibre threads and a composition of gums and clay with sufficient permanency to make the finished boat quite water proof”.

Over subsequent years the tree carried a sign advising that a native canoe had been cut from its bark. It became a favoured pull-over place for motorists along the highway giving them the opportunity to admire the Ngarrindjeri boat builders craft. Numerous photographs have been taken of the old giant with persons posing by its canoe-shaped scar. Pictures of the tree illustrate stories and articles in books and magazines, on fine wine labels and it has become an icon of our history, both in recognition of the traditions and creative skills of the Ngarrindjeri people but also by the efforts in its care and preservation by subsequent Councils and people of the district.

One would think that such a much-loved living creation in our landscape would be cherished as an important part of our history and a treasure of our natural heritage. Sadly that was not the case in the darkness of night during the weekend of 26-27th of December 1998, when a person in the blind anger of racial hatred took an axe or some similar weapon to the old gum in the self-appointed task of destroying the grand old tree by a nearly successful attempt at ringbarking it. By the skill of Alexandrina Council’s parks and garden staff the tree has somehow clung to life, fragile as it is. By the continued work of the Highways Department and intense care by Alexandrina Council staff may this venerable old giant continue in its witness of our unfolding history.