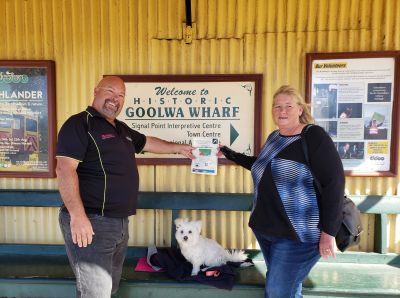 At the Goolwa National Trust History Centre, river travellers from interstate departure points are becoming a little more frequent now that the extreme temperatures of last summer blends into the cooler weather of autumn.

Recently a very quick visit by a voyaging couple from Yarrawonga who were expected a week earlier, were interviewed and had their application approved for entry into the Inland Rivers National Marathon Register. David Jones and Amanda (Mandy) Miller from Bacchus Marsh, Victoria had completed a six-month trip down the Murray from Yarrawonga in their trailable houseboat called Krackacan.

During their river travels they had the usual navigation problems of dodging reefs, sand bars and the underwater snags in the stream, as well as the occasional onboard problems or in some places having to carry fuel manually from sources to the vessel. Given these obstacles, David and Mandy found the ever-changing scenery and the friendly people they met all along the way, gave them an enjoyable experience and a happy store of life-long memories.

Much of the navigation obstacles of the narrower winding river were behind them as they neared Mildura, but then the weather turned on them with burning air temperatures hovering around 43 to 45 degrees. Then the boat’s air conditioner failed, but thankfully their generator kept up power for their fridge and freezer and other power requirements. They decided that they needed to moor up for a few days for the heatwave to subside, so they tied up at the Gol Gol pub jetty to plug into their power and during the day spend some well-earned shore-leave off the houseboat.

It was here they became aware that their houseboat was dwarfed by the big river liners around them – some were three-storied, 8 to 10-bedroom floating apartments. After tying up the Krackacan, David and Mandy adjourned to the pleasantly cooled pub where they were to meet their fellow sweating refugees who had found their haven inside to escape the fierce heat of the day. So, with cold drinks and the meals - which in David’s words were ‘amazing’, and the camaraderie among the gathering, it all made the hours pass quickly.

A couple of days later with the temperature around 40, the Krackacan was on its voyage downstream. David had contacted a technician to meet them in Renmark to replace the vessel’s air conditioning unit. As soon as they docked at the town wharf, David and Mandy met with the technician who immediately went aboard to attend to the faulty cooling unit. While the replacement was proceeding the couple called on the vessel docked immediately downstream of their vessel which had attracted their attention.

This vessel was the home and business of Frank, ‘the Chookman’, a popular showman who has become a local legend.His vessel is displayed with items that reinforces his character and wit in his presentations - along with his chooks.

For David and Mandy, he was yet another of the rich kaleidoscope of the many larger-than-life personalities they had met along the mighty Murray.

With the new air conditioning system installed on their housebout, they bid a fond farewell to Renmark to continue with their quest of ‘Yarrawonga to the sea’ as emblazoned on the vessel’s banner. The six months they had allotted to their Murray journey was running dangerously close to an overrun. So, it was important now to make a quick run to Wellington to make up for lost time. David had kept in touch with me to constantly update their arrival date. As anyone who have made long downstream voyages, any estimated time of arrival is constantly subject to the unexpected vagaries of weather, water conditions or operational and equipment performance.

The final phone briefing I had with David who had arrived at Wellington, I had advised them not to attempt a lake crossing in that type of vessel. He was in fact relieved to be allowed that part of the journey to be waved and accepting that to fulfil the requirements of the IRNM Register, they must continue to Goolwa by road to present for an interview to make their application for entry into the Register. Subsequently, they arrived in Goolwa after wresting with the six-month voyaging date, with a one week overrun.

Would they do it again? David’s response was if he had the time, he would go back to Yarrawonga that day and spend this time more than six months on the journey. Mandy had other ideas. She loved everything about the trip, but next time it would be a much shorter time and a lot more refinements!