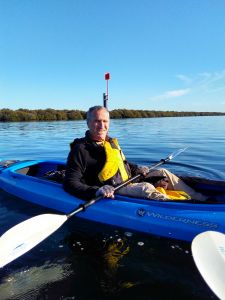 CONGRATULATIONS to our latest IRNMR retro applicants, Neil Gale (left) and Alan Warnes (right), who have successfully applied for retrospective IRNMR registration. Neil and Alan began their River Murray voyage on May 22, 2016 and as time became available to them, started on the twelve sections planned to complete the trip on November 19, 2019. Their journeys took them in stages between Khancoban NSW in the upper reaches of the Murray and to its outlet into Greater Encounter Bay at Goolwa, SA. Their total paddling time was 67 days covering the overall journey of 2431 kilometres.

Alan and Neil share other adventures together, including Alan’s catamaran voyage of an almost complete circumnavigation (bar a couple of hundred kms) around the coastline of Australia. Neil joined Alan for a portion of the cruise, from Darwin to Fremantle. Well done guys!