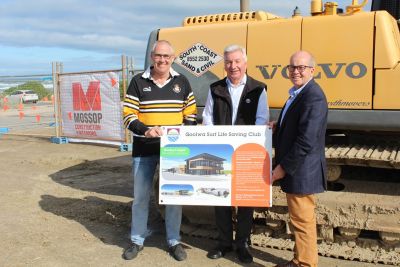 BY RIVER AND SEA by Frank Tuckwell – February 2019

Building work continues at the beach with the new Goolwa Surf Life Saving Clubhouse, now steadily heading towards its completion before the end of this current surf season. During these past weeks of summer, it has been a tight squeeze for traffic in the carpark and in some cases negotiating around construction work had to be made with greater care to gain the vehicle access track to the beach. Up in the carpark at times parking space has been a bit tight but despite all the obstacles, ever-popular Bombora has been keenly sought out by regulars and visitors alike to enjoy its tasty treats and refreshments. Whether by river or sea or around the town, we now enjoy a splendid array of first-class dining places where we can celebrate, meet friends and visitors and enjoy our wonderful built or natural environment.

One can’t help realising what a wonderful town and island we’re privileged to live in, and how we don’t need to travel elsewhere to find and enjoy the greatest and the best Goolwa has to offer, from its rich history reflected in an abundance of heritage buildings, and the village atmosphere, or taking a cruise on the magnificent old PS Oscar W along the grand sweep of the town’s river front, or to feel the pure fresh air on your cheek as you take in a seemingly endless seascape of the Southern Ocean at Goolwa Beach with its kilometres of clean sandy beach washed by the big rolling surf, made safe and friendly by the highly trained and dedicated members of the Goolwa Surf Life Saving Club.

Ah! The joys of a beach picnic, frisbees and beach balls or of discovering that there’s nothing like experiencing the exhilaration of swimming in live- water surf between the flags - and it’s free! Or if swimming is not your whim of the moment, perhaps to take a stroll along the sands to watch players, ankle deep at the water’s edge performing the unique Goolwa cockle shuffle, a ritual dance in season that rewards the participants with a tasty gourmet shellfish snack – or as in the case of some of us with a slightly peasant-like instincts, they make top fish bait. Roll on summer!

I’m constantly amazed at the achievements of people who set out on the quest of adventure on our great Murray Darling river system with the object to follow it all the way to Goolwa and the Mouth. In doing so they find within themselves a realisation and deep respect of these great waterways they have just travelled. As they are interviewed on arrival here in Goolwa, almost without exception, they reflect on the fact that although they had stated off to conquer the great river, they were only to find the reward they have gained is given by the river but the cost that is to become entirely enamoured by it. The latest person from whom I have recently received an application for entry into the IRNM Register proved no exception to those qualities exhibited in others who have won their places in the Register. Survival and first aid trained, 20-year-old Chris Hayward is that latest person to gain that entry, and his story is amazing.

Chris had a desire to set out to achieve the journey of the classic Source to Sea course. This course is very demanding as shown by just the handful of voyagers who hold the title. The course to be covered lies between the source of the Murray where it springs from the earth near Forest Hill in the Kosciuszko National Park, to end at the Murray Mouth, Goolwa. It requires on-river travel and a significant effort in energetic Alpine hiking. Chris is a strong-minded young man who not only wanted to win the title, he wanted to make it outstandingly different in the way he achieved it. This he did simply by doing the course in reverse. In short, he would set off at the end of the course by canoeing up the Murray from the Mouth at Goolwa, then to hike into the Kosciuszko National Park and arrive at the Murray’s source at Forest Hill at the start of the classic course. Then finally, he’d crown it all off by continuing his hike to the summit of Mt Kosciuszko!

On the morning of December 11, 2013, young Chris Hayward stood in the water of the Goolwa Channel at the Murray Mouth to begin his journey, and then by bodily lifting his kayak above his head he challenged the mighty Murray to take him on as he pulled against its current to attain his goal. He had the aspirations of an adventurer, used to rugged outdoor style of living, resourceful, and a problem solver. He had an appreciation of the natural world he would be living in for the next six months it would take to complete the task and win his place in the Inland Rivers National Marathon Register.

So, Chris began his long pull up the Murray’s course from the broad waters of the lower stream and then into the narrower twisting sections where the current was more forceful and demanding on his energies. On reaching Lake Hume, he left his canoe and contemplated another mode of travel – hiking to accomplish the next section of his journey to the source. Taking the relevant equipment from his canoe he strapped on an 40kg pack containing his tent, bedding, clothes and food, first aid and communication gear, and carrying other useful gear in his pockets, pouches and hanging from his belt.

With the same determination he showed in starting from Goolwa, he set out along the river to follow the Murray Valley Highway to Towong, where it intersects with the Alpine Highway. Here he followed the Alpine to a spot where he could access a fire track that would take him deep into the Kosciuszko National Park. These fire trails are rough four-wheel drive vehicle tracks with deep ravines, steep hills and inclines making hiking slow and walking difficult on the deeply water rutted track.

On the 22nd of May 2014, Chris Hayward had passed Cowombat Flat and reached the source of the Murray near Forest Hill. At this point he had completed the classic Source to Sea course, albeit in reverse. In reaching this section of his long journey, he was now in the wilds of the Australian Alps and at the end of autumn. He had endured a temperature range from a summer high of 46 degrees during the inland river travel and now in the mountains at the end of autumn with a night temperature low of minus 6 degrees. The journey had made physical demands on Chris which would have made a lesser person give up. At times during the trip he had been poisoned and hospitalised with severe gastroenteritis and ignored a warning by his doctor to give it up, performed first aid and bush surgery on badly blistered feet, and battled the worst extremes of temperature and weather, but undaunted he pressed on.

Fully determined to honour his claim of ‘Sea to source and summit’, he pressed on to fulfil his final objective of reaching Mt Kosciuszko. He tramped the rough track for another four days and staying overnight in ancient, rugged Alpine huts, built with Mountain Ash timber logs with corrugated iron roofing, built to provide overnight shelter for hikers and skiers. On May 26, 2014 Chris stood by the plaque at the summit of Mt Kosciuszko with the Australian flag wrapped around his shoulders, and with a strong sense of achievement, he justifiably felt he was on top of the world!

You can go along on U tube with Chris on his great adventure on Google. Chris Haywood River Murray adventures.