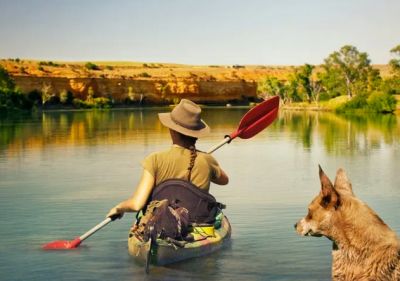 In reviewing the record of entrants of Inland Rivers National Marathon Register (IRNMR) for the year 2019, there were 15 successful applications for registrations and 2 retro applications pending, a total involving 21 people who arrived in Goolwa from interstate departure points along the River Murray–Darling river system. They came from all seven states and the ACT.

Of the total number, 12 applicants were kayakers, either single or double paddlers. 3 applications came by other modes of travel. The rivers travelled were principally the Murray and the Murrumbidgee.

We frequently hear from IRNMR entrants and we highly value their continuing connection with us. One of those entrants who we hear from occasionally is Albany Asher, a media specialist who with her partner James Livingstone, also a media person, paddled their kayaks into Goolwa in March 2014. I met them at the National Trust Museum where they asked about the IRNMR. Following the required interview, they were duly entered into the Register. They introduced me to their two dogs, Onyx and Rocco who travelled the whole course from Bringenbrong Bridge to Goolwa, one on each of the two canoes. Next, I met their land support man, Rick Kirkwood, who arrived in a truck with all the latest types of equipment for recording a documentary of their trip of 17 months along the Murray.

Of the many things we discussed was their plan to produce a documentary of their Murray River journey as part of a series on this and possibly other Australian rivers. They didn’t just want to turn out another river travel video, but one which would feature the birds, animals, reptiles, natural features and scenery along with two people and their dogs living and talking about their experiences as it happens.

This production was their own expert private enterprise, so they could only work on the complexities of their project in their off-duty time. Over the intervening years they have converted thousands of feet of visual and sound material into a documentary through which the stunningly beautiful vision takes the viewer with Albany and James and their two scene-stealing dogs, along the length of the magnificent natural world of our mighty River Murray, finally arriving at Goolwa – our wonderful town by river and sea.

We will get the chance of meeting Albany at the Goolwa premiere of this visual treat, “Rivers of Australia – A journey along the Murray” on Sunday, February 16 at 2pm at the Centenary Hall, Goolwa. This film is being screened as part of the ‘Just Add Water’ arts and culture program. Tickets are on sale through the Goolwa Visitor Information Centre (1300 466 592). For further information go to http://www.visitalexandrina.com

Come along and give Albany a typical Goolwa warm welcome and have an enjoyable afternoon at the Centenary, then join her in a Q&A session following the screening. See you all there!