Goolwa and the World in November 1940

AROUND THE TOWN by Frank Tuckwell

A report received from Washington on the 5th, declares that President Franklin. D. Roosevelt has been elected for an unprecedented third term of office in U.S.A. In Europe, the Greeks have pushed the Italian armed forces out Greece and are pursuing the retreating invaders back through Albania. The intensity of Nazi bombing of London has been stepped up with hundreds killed and thousands injured. Many of the city’s landmarks have been destroyed or damaged, including Buckingham Palace which has been hit three times. An Australia-wide appeal has been launched in all states under a Lord Mayor’s appeal for London’s air raid victims.In Goolwa, the local Council has voted five guineas (five pounds and five shillings) to the appeal.

The Italians with a force of 300,000 in Libya have launched and advance toward Egypt.Germany earns world-wide condemnation against the Nazis for sinking a ship carrying child evacuees from the London blitz on their way to Canada, resulting in the death of 90 children by drowning. An increased threat to the security of the Asian-Pacific area is growing as a military alliance has been signed between Japan and the Axis forces.

Disturbing news was announced on November 8 that a freighter was sunk on the Australian east coast, this was followed up next day by news that a second freighter was damaged when it hit a mine off Cape Otway. It has now become obvious that German minelayers are operating in Australian waters. Bass Strait has been temporarily closed to shipping. 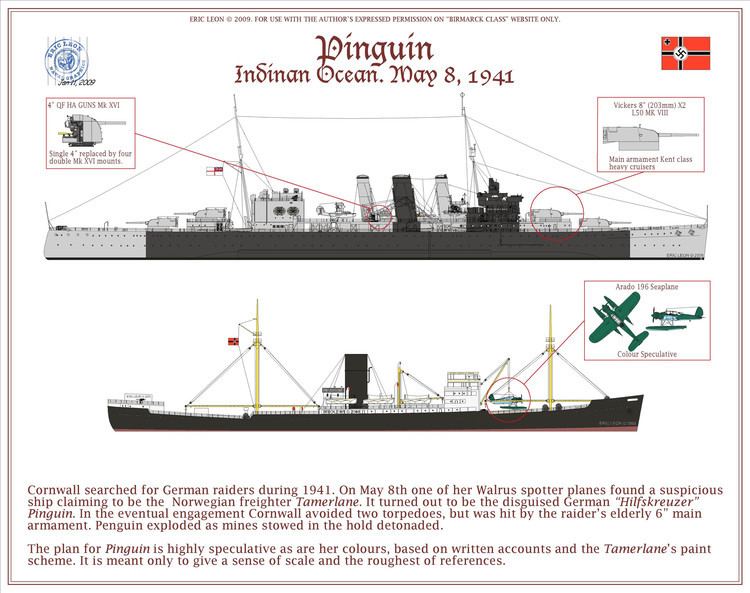 On November 7 in the darkness of night, two ships of the German Kriegsmarine, the armed merchant raider ship 1 Pinguin and its commandeered Norwegian tanker Storstad with a German crew aboard, slipped quietly into the shipping lane through greater Encounter Bay waters. Guided by a glow of the city of Adelaide’s lights in the low cloud ceiling over the horizon to starboard and the lighthouse flashing signals of Cape Jervis on the mainland and Cape Willoughby on Kangaroo Island dead ahead, they were on course on their deadly mission. In their approach, the two ships had just passed within 20 kilometres of Goolwa Beach. Both ships had then laid in the island group surrounding Kangaroo Island through the previous day, during which Captain Kruder had ordered the launching of the Pinguin’s Heinkel floatplane to reconnoitre around the islands and up along Gulf St Vincent, past Outer Harbour then looping around Parafield and heading down the coast over Normanville. From there the plane circled around behind Kangaroo Island to where the Pinguin lay at anchor. During the flight of the Heinkel, it was unofficially sighted several times. The Cape Willoughby lighthouse keeper’s son saw it and excitedly told his father, who at first thought the lad had been mistaken, but later that day he entered the sighting into the lighthouse logbook.

In the fading light of the day, with the scout-plane winched on board and with boilers steam up, both vessels headed south-east out of hiding into greater Encounter Bay and loop around to make their run into Backstairs Passage. Here the vessels parted company, Captain Kruder ordered the Storstad to proceed to other sites to sew its mines leaving the Pinguin in the Passage. Using the lighthouses on Cape Willoughby and Cape Jervis as reference points, Captain Kruder and his crew set about to lay out a pattern of mines stretching for 10 miles across the Backstairs Passage channel.

A short time later the two ships came together to lay the remainder of their mines amongst the islands and the southern Spencer Gulf waters before racing out into the comparative safety of the vastness of the Indian Ocean to rendezvous with another German armed merchant raider Atlantis.

The RSL has worked hard to bring the local VDC home guard up to strength helped by the district Rifle Club. The Goolwa troop now has a roll call list answered to by 80 men belonging to this volunteer organisation. The unit is commanded by Captain Eric (E.R.) Mayne with Lieutenants Bill Ness and Jim (J.R.) Elfenbein of the Goolwa RSL.

The VDC has a training session every Sunday afternoon, mustering at the primary school assembly and sports yard for drill. Basic training with field exercises are being held at other appropriate sites in the district. Tuesday evenings have the troop engaged indoors at the Goolwa Institute hall for lectures, weapons and equipment instructions and other training sessions.

The Goolwa RSL-led VDC, assisted by the local Rifle Club had planned the combined parade of home guard units from Goolwa, Victor Harbor and Yankalilla, comprising A Company, 27s Area. The allotted officer commanding the combined exercise was Captain Depledge. The site chosen for the joint parade was on a local 2farming property made available to the company by Frank Ayliffe. His large property lies south of the Goolwa town limits bounded by Barrage Road along the river at its eastern end, to Goolwa Beach Road in the west. The whole property stretches in an area across from the town limits to the southern beachfront. For many years, the Goolwa Rifle Club has used part of the extreme south-eastern sand hills section as its rifle firing range.

The combined units parade took place at Ayliffe’s farm on Sunday, November 17, attracting a large number from the general public to witness the event. The morning program was devoted to ceremonial parades. Each town unit took part in both independent and united unit drill and marching displays accompanied by rousing martial music provided by the Victor Harbor Town brass band. The C.O. of Area 27s, Lieutenant Colonel H Parsons inspected the units, and was clearly impressed in what he observed as he took the salute in the march past prior to their dismissal for lunch.

The afternoon was given over to a war game to test levels of training and cohesion in unit and combined company action. In a mock attack mounted against a specified target carried out in two advances by the company using the cover of ground folds, patches low hilly rushes and occasional bushes, they made their advances to the target. The company was being observed by the battle umpire Captain Depledge (Victor Harbor VDC unit), to assess all ranks at their present training levels.

At the conclusion of the field action the umpire’s observation was that the company had demonstrated that all ranks had benefitted by the training they had been undergoing since the VDC had so recently come into being. This had been most evident in the war games of the afternoon. In particular was the ingenuity of the Goolwa platoon who had fabricated three mock-up models of Bren Guns which operated with fireworks giving a very realistic sound impression of actual machine gun fire during the battle, so much so that the Colonel needed to inspect them to satisfy his curiosity about their identity.

Lt. Colonel Parsons expressed his great satisfaction with the whole parade and his appreciation of the work done by all ranks. Captain Depledge was judge of all manoeuvres and has carried out his duty in an impartial manner. Captain Mayne (who is also Captain of the Goolwa Rifle Club Reserve) was O.C. of operations of the day to whom the Colonel paid a compliment together with the Goolwa group, for the very able way in which all arrangements were successfully carried out. Goolwa had set a high standard which all future inter-unit parades would be required to meet.

During the month of November two men from Goolwa have enlisted for military service. Selwyn (Sel) Rogers, of Clark Street, a contract farm worker at Laffins Point, has enlisted in the RAAF, he is married with two children. Edwin (Ted) Lloyd enlisted for active service in the army but failed the medical examination for the AIF as being classified B2, however he was accepted for army garrison duty in Australia.

1 Captain Kruder and the Pinguin’s luck ran out on the north-east coast of Africa on May 8, 1941 as they happened to run into the range of the guns of HMS Cornwall, and after a sharp battle, Pinguin blew up and sank.

2 This property was sub-divided during the 1960’s to become the whole South Lakes development, including the golf course covering this area.