As Britain faces the possibility of German invasion along the Channel coast, the Battle of Britain is being fought in the skies over England. The RAF is carrying the full force of the war as the waves of German bombers carry out Marshal Goering’s plan to knock out British air bases on the ground. While the bombers carry out this task, their fighters attempt to knock out the RAF in the air to gain mastery in the sky.

The battle has been raging throughout this month to the extent that although the RAF losses have been heavy, they have shot down almost a thousand enemy aircraft and taken a great number of their surviving aircrews prisoners-of-war. Without winning air superiority, the German high command will have to think out a new strategy against the RAF or put off the invasion of England. During these last few days of August, their ponderings has brought about a lull in their aerial blitzkrieg against British airfield bases, as Berlin figures out what to do next.

In the House of Commons on August 20, in delivering his report to the House Prime Minister Churchill has made a moving speech in which he paid honour to the airmen of the RAF, who are persisting to endure the unendurable in the fire in the skies over Britain. A quarter of the RAF fighter pilots taking part in the Battle come from the British Commonwealth nations including Australia, as well as some from the USA and other countries.

“The gratitude of every home in this Island, and indeed throughout the world, except in the abodes of the guilty, goes out to the British airmen who, undaunted by odds, unwearied in their constant challenge and mortal danger, are turning the tide of the World War by their prowess and by their devotion. Never in the field of human conflict was so much owed by so many to so few”.

Italian forces in North Africa, now aligned with Hitler, boldly comes into the war by launching its army into British Somaliland which potentially endangers Egypt, the Sudan and the Suez Canal. In this first week of August, a heavily armed force of 2000 Italian troops advanced into Somaliland, capturing three towns. Only slight casualties were suffered by the British forces, who fell back to a holding position. The British Middle East High Command states that a strong air attack was mounted by bomber and fighter aircraft on Italy’s largest overseas war base at Massawa, inflicting damage on shipping, port facilities and anti-aircraft defence sites. British fighters engaged a flight of Italian aircraft, however, all British aircraft returned safely to their bases. 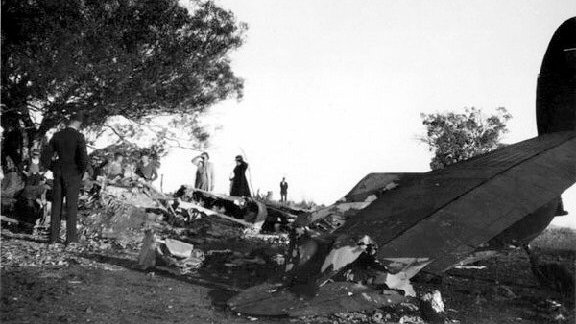 Tragedy struck on Australian soil when an RAAF Lockheed Boston bomber crashed and burnt while making its landing approach on the outskirts of Canberra on the 13th of this month, killing instantly all ten of its passengers and crew. Politicians and three cabinet ministers were among the casualties of the fatal crash. These include Brig. General Street, Minister for Defence; J.B. Fairbairn, Minister for Aviation; 1Mr Thorby, Minister for Interior; Sir Henry Gullett and Sir Brudenall White. The crash of the aircraft and loss of its crew and some of the leading national decision makers, brings the stark actuality that war is real and can strike at home as well as in foreign fields in another hemisphere. This tragic crash is also revealing to us that Australia is now approaching the edge of the deepening pool of world-wide conflict.

How could it be that a disaster of this magnitude should happen in the peaceful countryside surrounding our national capital, not too distant from where sheep quietly graze on the gently sloping grounds in front of our Commonwealth parliamentary buildings?The gloomy outlook of dark shadows of war can reach even into this beautiful and remote part of the globe.Where now is there a voice to dispel that prospect of gloom?

One of Goolwa’s elder and venerated retired river skippers, Dave (D.J.) Ritchie, sees how the gathering storm clouds of war over Britain has produced a statesman, whose prosaic words roused the nation and lifted the sense of gloom of its people with hope. So, Captain Dave Ritchie sat down and penned his sentiments in a part of his letter to a city daily.

“Sir – A United States commentator (Dorothy Thompson) contends that the war has developed into a fight between Churchill and Hitler. Mr Churchill for ten years or more tried to point out the peril in which Britain stood, and the urgent necessity of preparing against the foe of today. His voice was like one crying out in the wilderness. When France gave up the fight and it was doubtful whether Britain would be able to secure and control the French fleet, Mr Churchill said, “We will fight on, even if we fight alone”.

I submit that the victory will go to the Prime Minister, descendant of the Duke of Marlborough, and a worthy successor of William Pitt. Winston Churchill forever!”.

At the Goolwa RSL club’s August committee meeting, the members accepted the resignation of their president, Colonel A.S.M. Lovell, who has been placed in command of the 18th Machine Gun Regiment (Militia), a task which will require his full-time attention. Jack (J.J.) Spencer, a WW1 veteran, was elected to replace the Colonel as president.

Jack was the Charter president of the Goolwa RSL club on its foundation in 1919, serving in that role until 1923, then again in 1926 to 1928, and 1930 to 1932. He is one of three Spencer brothers who joined up in the first AIF, enlisting in January 1916, to serve in the 10th Battalion, 3rd Brigade in the 1st Division AIF. He saw action for the first time in France at Pozieres, in the Somme Valley and at Ypres in Flanders during the second half of 1916. The next year they fought again in the third battle of Ypres.

Then as the German Spring offensive was launched during the first half of 1918, the 10th Battalion helped stop the German push. When the Allied offensive was launched in the Spring, Jack saw the Germans rolled back in fighting near Amiens, leaving the battle fields littered with abandoned enemy artillery pieces, machine guns and other weapons; one piece from which would be sent home to Goolwa as a 2war trophy. When the three Spencer brothers returned safely to Goolwa, Jack went back to fishing and community service.

Another item on the agenda of the Goolwa RSL sub-branch meeting for August 1940 was the regular parades and training program for the RSL Volunteer Defence Corps (VDC), generally known as the ‘home guard’. The federal government had allotted this force to the oversight and management of interested local RSL clubs around the nation, utilizing the immense value and military experience of its members. Regular weekly parades of the Goolwa VDC are held on the assembly yard of the Goolwa public school with active training held in other appropriate places in the district. The VDC membership is open to men beyond military service age, medical rejected for active service and those in reserved occupations.

A press correspondent from Goolwa was impressed in the local VDC at their weekly parades and commented to that effect in writing:

During the past few Sundays I have strolled along the Parade Ground of the Goolwa School and have been surprised to hear the officer in charge call out 100 names – 30 Returned Soldiers and 70 rifle men between the age of 40 and 50 years, answering the roll call every Sunday.

Under the instruction of Eric (E.R.) Mayne (Rifle Club), Harry Cochrane, Bill Ness and John Elfenbein (all Returned Soldiers) the troops are put through rifle drill, after which a two to three mile march takes place to the tune of a bass and kettle drum. In the march I noted Dave Ritchie, Reg Graham, Bert and Bill Armfield, the Scott brothers, Bert Baker, Arthur Neighbour and many other old stalwarts who were rejects from the last war, but who are still prepared to do their bit for the Empire. We are in the war, and will see it out to victory”

Enlistment from Goolwa men continues this month with four local men signing up for full-time army service. Two of these have joined the AIF, and two did not quite make overseas service due to some effects from their WW1 wounds, but were accepted for service within Australia in one of the Garrison Battalions. Ron (R.T.) Reed from Goolwa, currently working in West Australia, enlisted in the AIF in that state on the 10th, followed by his brother Jack (J.D) Reed, carpenter and builder, who worked with his father building the bandstand in the Goolwa memorial gardens and enlisted from Goolwa on the 28th. 3Bill (W.A.) Tuckwell, dairy farmer who brought his English war bride home in 1919, enlisted from Goolwa on the 23rd and was posted to the 4th Garrison Battalion. Also, this month two other WW1 veterans, Alf (A.H.) Thompson, dairy farmer from Hindmarsh Island, and 4Vince (V.H.) Davies enlisted from Goolwa and was likewise posted to Garrison Battalion duty.

At the District Council meeting for August, it was decided that a district committee should be formed to encourage recruiting in the Council area. The committee would of course include elected Council members and the District Clerk, Reg (R.H.) Bristow-Smith, but it must also include other leading members of the community who could give advice and guidance to intending enlistees in arranging changes from their civilian to pre-military life. For this purpose, Police Constable H.A. Ward; postmaster, Wilf Harris; Head Teacher, Harry (W.H.A.) Cochrane; Goolwa RSL, Lou Peake; and Goolwa Rifle Club, Eric Mayne, would initially constitute the recruiting committee which would be added to as required.

At the opening of the August Council meeting, incoming Council chairman, Melphord Jacobs had congratulated the retiring chairman, Walter “Wattie” (W.F.) Newell, for the able way in which he had carried out his duties during his term of office. In the transfer of leadership from the ever-popular Cr. “Wattie” Newell to Cr. Melphord Jacobs, the transition of the District Council of Port Elliot from its peace-time past to a wartime footing was now complete.

The greatest experience the town of Goolwa has passed through since the peak of the roaring days of the Murray River trade of the 1880’s, was the construction of the lower Murray barrages which during the last five years from 1935 until the start of this year of 1940, has generated an excitement that lifted it from the gloom of the great depression and gave people a vision and an expectation of greater things in the community’s future. Apart from the war in Europe, the eventual but not unexpected end of barrage construction work and the mass exodus of construction workers and their families, it has now left some in the community with a feeling of uncertainty about their future and the direction of their pathway ahead.

1 Harold Thorby, then Federal Minister for Defence (later the Interior), has been asked by the local District Council in October 1938, the reason why the Qantas four-engine flying boat “Centaurus” had landed in the River Murray in front of the town’s wharf. Minister Thorby replied that it had been carrying out a survey of lakes across the southern Australian coastline suitable for a chain of flying boat bases.

2 Private Jack Spencer (10th Battalion) tagged an abandoned German Spandau LMG 08/15 machine gun on August 1918 on the same day Private Bill Tuckwell (27th Batt.) his neighbour at home, fell wounded on a nearby battlefield. Both men survived to return home, the machine gun arrived in Goolwa in 1921 as part of the captured weapons distribution program and a gift to the town by the Commonwealth War Trophies Committee. It now is on display at the Goolwa National Trust History Centre museum.

4 Private Vince Davies was posted to duty for the duration guarding the Japanese POW camp at Loveday SA.