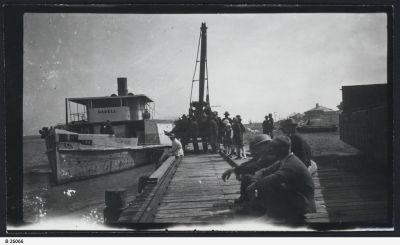 Launch of the Cadell

On Saturday last, October 7th, Captain Johnston’s new steamer Cadell, was successfully launched at Goolwa in the presence of a large number of spectators. Everything having been previously prepared, the vessel at the appointed signal, glided gracefully down the ways into the water.

The ceremony of christening was performed by Miss Johnston who in accordance with the ancient custom threw a gaily decorated bottle of wine against the bows, and a flag was then run up bearing the name of Cadell, amidst the loud and prolonged cheering of the spectators.

The beautiful proportions of the vessel were the admiration of everyone and reflect the highest credit on Captain Johnston, who himself designed her, and also on the builder, Mr. W. Gordon of Goolwa. Her dimensions are as follows – length overall 125 ft, length of keel 118 ft, beam 20 ft, depth of hold 9 ft. She is divided into four compartments by three iron water tight bulkheads, and is what is generally termed a composite, being built of iron frames and timber planking, the latter of native gum three inches thick throughout. The keelson is of native hardwood strengthened with a piece of railway iron the whole length. Her propelling power will be paddle wheels, driven by the best and most recently improved compound engines of 50 horse power expressly built for her and imported from Europe. The vessel has been built entirely under the superintendance of her owner and strictly in accordance with his own idea of the sort of vessel required for the Murray trade, either inside or outside the Murray mouth and will prove available for trading from Bourke or Albury through the mouth to Melbourne, Sydney or even England, if required. The draught will be two feet light and about five and half feet loaded. Captain Johnston has now three steamers – the Wentworth, Maranoa, and the Cadell.

At the close of proceedings a large company of ladies and gentlemen were invited to the residence of Captain Johnston where a sumptuous repast awaited them. The Captain occupied the chair, and Mr. T. Goode J.P. filled the vice-chair. At its close Capt. Johnston gave the usual loyal and patriotic toasts.

Mr. T. Goode jun. proposed “the health of Capt. Johnston and success to the Cadell”. He had, he said, seen the first launch at Goolwa, that of the Eureka. It was a good many years ago, and since that time he had seen on the river almost every variety of steam boat, from the Settler to the Express. Captain Johnston had spared neither trouble or expense in order to make the Cadell all that was needed for the Murray trade. He [Mr. Goode] considered her a fine model and a credit to Goolwa, and she was well and strongly built. Captain Johnston had done more for the Murray trade than any other person in South Australia by continually demonstrating beyond the possibility of contradiction that the Murray mouth was a natural outlet for the trade, and easily navigated with suitable vessels. He considered Goolwa to be the “Clyde” of South Australia. There were more steamers built at Goolwa than ketches at Port Adelaide, and he wished the enterprising owner of the Cadell great prosperity.

Captain Johnston in responding said he thanked them for the honour they had done him. The construction of the Cadell had been attended with many hours of anxious thought, and he had spent neither effort or expense in order to make her perfect. It was a difficult matter to build a vessel that would do well either in the river or through the sea-mouth, but he had confidence that the Cadell would accomplish both – that she would be able to go anywhere on the river as well as to Port Adelaide and anywhere else.

Mr. Graham J.P. proposed “the river trade”. He stated that he had been connected with the trade nearly all the time he had been in the colony, having first entered the office of the late Mr. Younghusband in the early days of the River Murray Navigation Company. He had witnessed the trade continually increasing and though he had seen it fluctuating at times it had always revived again, and new steamers were always in demand. He considered it a significant fact that during the last month about 400 tons of refined copper had been brought down the Murray and it was likely that in consequence of the runs in the Darling having so much improved, that an immense quantity of wool would be brought down.

Mr. Fergussen proposed “success to the Port Victor wool ships”, compiling with the toast the names of Captains Paige and Lawrence. He was glad to see two such large vessels [over 1000 tons each] in Port Victor, and looked forward to the time when the breakwater would be completed and they would see not only Adelaide vessels loading there, but Melbourne ships coming for wool which now found its way to Port Phillip by other routes. It was not at all unlikely that they might yet see the day when wool sales would be held at Victor Harbour.

Captain Paige of the Astracan responded. He had a very high opinion of Port Victor. When the mail steamer could not land passengers at Glenelg, he lay in Port Victor and never strained a rope-yarn, while during the same gale at Port Augusta, the Beltana parted both moorings and the City of Adelaide her stern mooring. He would sooner go to Port Victor than Port Adelaide, as he had shown by returning at the present season. He was glad to see that the government intending constructing a breakwater as it was a work greatly needed, in order to facilitate the loading of vessels in all weathers and would do more for the river trade than could be done by any railway.

Captain Lawrence of the Oaklands said that he would endorse all that had been said by Captain Paige in favour of Port Victor. This was his first visit but he thought that it would not be his last. He would not be surprised if the Oaklands became a regular trader.

Mr. T. Goode jun. proposed “the health of Captain Cadell, the pioneer of the river trade”. He regretted that he could not do justice to the toast - Captain Cadell was deserving of all praise. It had been his privilege to make the acquaintance of Captain Cadell on his first turning his attention to the river trade, and he had seen the keel of the Captain’s first boat laid on the spot where they had that day witnessed the launch, and it had given him great pleasure to see that Captain Johnston had honoured the Captain by naming the vessel after him. He [Mr. Goode], well remembered the anxious days and evenings spent with Captain Cadell sitting over the shanty fire waiting for the arrival of the first steamer, the Lady Augusta, and talking over the future prospects of the river trade. He also well remembered the rejoicing which took place when that vessel arrived safely in Goolwa waters. Captain Cadell was a fine specimen of a sailor and thoroughly unselfish; but like most pioneers had spent himself and his money in opening up a trade of which others were to reap the benefit.

Captain Johnston responded, after which the health of the host and hostess and the builder, Mr. Gordon were given. Captain Lawrence then gave “the press”, and the proceedings which were of an unusually pleasant character, closed.