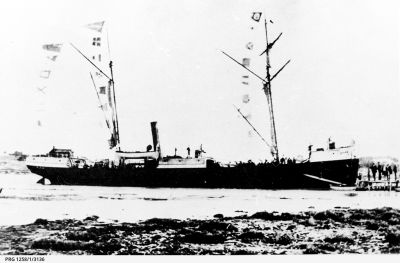 Arrival of the Queen of the South

It is with great pleasure that we have to chronicle the arrival at Goolwa of Captain George Johnston’s fine new steamer, the Queen of the South, on Monday last, the 11th instant. She had been expected since Saturday, and as it had been notified that steamers would run to the mouth, conveying passengers free of charge, a considerable number had gathered together at Goolwa on that day. After various rumours had been circulated, something definite was known by a telegram from Adelaide to the effect the vessel had started early in the morning from Port Adelaide and consequently could not get to the mouth that day. In the evening it was known she had arrived safely at Port Victor. Captain Johnston brought her in between the Seal Rock and Granite Island, where a heavy sea was running, with frequent breakers right across, so that some idea was obtained of what she could do in the surf.

On Monday such a heavy sea was running outside, that it was doubtful if any attempt would be made to enter the Murray but on the strength of the fine day and the free trip, about 600 people had congregated about the Goolwa Wharf from all parts of the district. Owing to the large number of people present, Capt. Wallace, of the Albury, who had charge of the procession of steamers, determined that if no word came from Capt. Johnston by 2 p.m., he would give those desirous, a trip to the mouth. The captains of the Princess and Freetrader respectively also determined on doing the same. At half past twelve however, a telegram was received from Capt. Johnston saying that he would leave about noon. This telegram was handed into Port Victor about 11 am, but owing to some bungling, did not reach Goolwa till the time stated.

A start was made from Goolwa shortly after one, the Albury as flagship going first, followed by the Princess and Freetrader, each boat having onboard a great number of people. Shortly after leaving Goolwa, smoke was seen in the direction of the mouth, and it was then thought that it must be the Queen of the South; hopes however were entertained of being in time of seeing her come through, but they were blighted, as very soon the spars could be plainly seen over the sandhills and unmistakably inside the mouth. Though of course disappointed at not seeing the entrance, everyone was happy to see the boat safely over the danger.

The Queen of the South came to about half a mile on the Goolwa side of the mouth and waited for the procession. The Albury came alongside first, and it was curious to note the contrast between the two boats – the one that had done the trade and the one that is going to do it. Three hearty cheers were given by each steamer as she came alongside the “big ship”, and were duly responded to. a general rush was made from the river steamers to inspect the new arrival and the comments passed could not but have been pleasing to Capt. Johnston who had every reason to be proud of his vessel.

After some time had been spent in examining the vessel, an adjournment was made to the comfortable saloon, where Mr. T. Goode jun. Mayor of Goolwa, proposed Captain Johnston’s health in a few well-chosen remarks and congratulated him on his safe arrival in the River Murray. Mr. Fergussen followed on behalf of the river traders. Captain Fuller on behalf of the captains of river steamers and Mr. Lindsay M.P., [who was a passenger from Victor Harbour], on behalf of the residents there, also offered their congratulations. Captain Johnston responded, [the toast having been drunk in bumpers of champagne], thanking those present for the manner in which they had drunk his health, and also the honour done him by so many people making a holiday to welcome him in his new boat. Soon after a move was made to Goolwa. The Queen of the South led the way this time crowded with passengers, followed by the Albury, Princess and Freetrader. Goolwa was reached about 5 p.m. after a most enjoyable afternoon had been spent.

Although a description of the Queen of the South has already appeared, it may not be amiss to say a few words now.

She is an iron vessel of 200 tons. Topsail schooner rigged ; her length is 132 feet overall ; beam 22 feet 6 inches and depth of hold 8 feet 6 inches. The deck is very roomy and has various houses on it for the accommodation of the crew. She has a commodious top gallant fore-castle and a poop which give her a very high appearance. Everything aboard is of the newest and best make, from the patent steering wheel to the patent windlass for heaving up the anchor, this latter being connected to one of the steam winches and works admirably. The saloon is very snug and comfortable with accommodation for twelve passengers. The engines are inverted compound of 45 horsepower nominal indicating 130 horsepower. They are made by Messrs. Muir and Houston of Glasgow, which would be a sufficient guarantee of their excellence. There is a steam winch at each hold which could not be worked this trip but which would, after this, be used for working the cargo.

The steamer was built under Lloyd Survey by Messrs. H.M. Macintyre & Co. Paisley.

Goolwa looks something like a port with the lofty masts of the Queen of the South towering above the houses and it is to be hoped that the day is not too far distant when other steamers will also come direct to Goolwa from Port Adelaide and Melbourne.