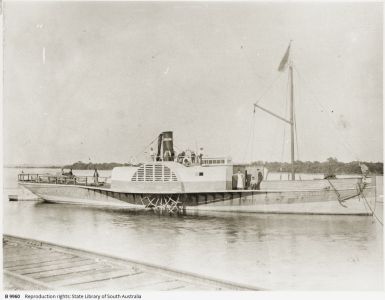 Grounding of the "Cadell" at the Murray mouth

The Cadell with about eighty passengers started from the Goolwa wharf immediately on arrival of the 10.50 train, and reached the Murray mouth about 12.00 ; steamed around the buoy and up the Mundoo and made fast, a great number of passengers going ashore with the intention of killing bunny. After spending time on Mundoo Island, the whistle was sounded for all hands on board and at 3.00pm was homeward bound, with strict instructions from Mr. McRoberts the signalman as to our course. The tide and wind were both setting from the sea, blowing almost a hurricane. We had reached to within a hundred yards of the buoy when the current catching the vessel on the port bow, she took a sheer, and a sea at the time striking her amidships, forced her on the sand spit, where she rolled and bumped till 9.30pm, several of the ladies casting up accounts with Neptune. All provisions were reserved for the females and children, we poor members of the male tribe being left to our own resources. immediately on striking [which she managed to do so well, that she threw everyone of their understandings] two men were ordered into the boat, with instructions to coil a line down in the bottom and pull to the buoy which with great difficulty they made. They then made one end fast to the buoy, and after three or four fruitless attempts they managed to reach the steamer with the other end, which they made fast to the steam winch and bore taut. After getting a good strain on the line, it unfortunately broke, leaving us in the same predicament as before. Captain Johnston then jumped overboard to pick up the end of the line, which he succeeded in doing with the help of two boats, the ship’s and the signalman’s, the water continually breaking over them, and almost swamping them. After bending on a fresh line, and passing it to the winch and heaving taut, Captain Dickson [who had charge] determined to put Mr. Hardy, the engineer of the Queen of the South, with one of the men ashore, to walk to Goolwa [nine miles], and bring the above named vessel to tug us off ; but half an hour after their departure, the Cadell, owing to the continual strain on the line, gave two or three bumps and forged ahead into the chops of the channel, and steamed into calm water, where we had to drop anchor, on account of the condenser getting choked up with sand. We were then about half a mile from the mouth. The wind rising about day break, she commenced dragging her anchor and drifted towards the Murray mouth, where fortune favoured us with the sight of the Queen of the South bearing down upon us in charge of Captain Tate. In the course of a very short time she had passed and anchored to leeward of us in order to swing around. While she was picking up her anchor, the Cadell was driving before the wind, at a pace not at all slow, full broadside onto the Queen’s stern. A smash seemed to all on board inevitable but Captain Johnston who had pulled down below the Cadell in the dinghy was onboard the Queen of the South in a twinkling and moved her ahead, putting his helm hard to port, and clearing us by a few feet. The Queen then got alongside the Cadell for the transfer of passengers. With Captain Johnston’s usual forethought, notwithstanding the inclemency of the weather and the absence of sufficient accommodation, arrangements were made for the comfort of the women and children who as usual constituted the majority of excursionists. A bottle of milk having been produced, it was a sight to witness the rush for the poor little mites in long clothes. We made a fresh start with the Cadell in tow; but the wind being so strong blew both of us on the eastern bank, giving us the appearance of the blind leading the blind. After being aground about half an hour the wind suddenly changed and Captain Johnston his fore and stay sails, caused the Queen of the South to pay into deep water, leaving the Cadell anchored, and again started for Goolwa. On our way we met the Freetrader, sent through the courtesy of Mr. Fergussen to enquire as to the fate of both steamers. Captain Johnston asked them to continue their errand and render any assistance required. The Queen of the South reached the wharf at half past ten, the excursionists having twenty four of soaking for the small sum of one shilling; but fortunately, although there had not been much rest obtained, the time had worn away happily and as merrily as a marriage bell, everyone seeming to have enjoyed the “contre-temps” with the utmost good humour.

A lecture by the Rev. James Read and musical entertainment by local talent having been arranged at the Wesleyan Chapel for Monday evening the 20th May it was decided to organise a picnic during the day, and accordingly the steamer Cadell, which is now loading for the Darling being placed at their disposal by Captain Johnston, of the Queen of the South, the excursionists proceeded to the Murray mouth, the steamer leaving Goolwa about 11.am. The visitors numbered about 80, including a large proportion of the fairer sex, with a pretty fair contingence of children of tender years.

About a half an hour after starting the rain fell heavily and it became evident that Jupiter Pluvus was in an irate mood. However bye and bye a temporary gleam of sunshine brightened the hearts of the despondent, and the steamer reached the Mundoo Channel, up which she proceeded. On returning to the Murray, the vessel meeting the full strength of a powerful current, and a strong wind on her stern, was carried round and shot into the other bank. The engines backing astern at full strength were powerless, but the anchor was taken out, and by means of the steam winch she was cleared ; but unfortunately in the meantime quantities of sand had been sucked into the feed pipe and surface condenser and the steam in consequence falling off, the steamer unable to adverse the influence of wind and tide grounded again in the vicinity of the fairway buoy.

A boat was lowered to attach a line to the buoy, but owing to the rough water, the attempt was for some time unsuccessful. Meantime night drew on, rain came down heavily, and the violence of the wind hourly increased. The Cadell was labouring painfully, bumping and rolling; and the passengers who had only provided for a three hour trip, became rather dubious of their prospects. Captain Johnston at this juncture went boldly into the water, to achieve what the boat had failed to do, standing up to the armpits in water, while every few seconds a wave passed over his head. We may remark “en passant”, that he and his assistants were revived at intervals with cups of hot coffee which were passed to them ; but the time between waves afforded few opportunities of enjoying them. Eventually the Cadell got afloat ; but the engineer and several visiting brothers from other steamers had been unable to clear the engines from the sand, and so the anchor was thrown out, and as it was poor holding ground in the shifting sand, the vessel dragged slowly towards the Murray mouth, where the breakers could be distinctly heard roaring ominously.

In Goolwa from dusk till a late hour, many were the anxious enquiries and visits to the wharf, where the relatives of those aboard watched anxiously for the expected approaching lights of the steamer. Some thoughts were entertained, at about 8.00 pm. of sending another ship, but the darkness and wildness of the night induced the projectors to wait until daylight, in case of accident befalling the rescuing party, Mr. Fergussen in the meantime ordering the Freetrader to be under steam at daylight.

On the Cadell [to return to our suffering voyagers], arrangements were made to secure, as far as possible, the comfort of those aboard : the children were sheltered in the cabin, which is somewhat limited ; and the grownup folk were covered with sundry tarpaulins. In one part of the deck occasional songs were heard, and the chorus of some of “Moody and Sankey’s” melodies were heard at intervals. The Reverend Mr. Read passed the night mainly in walking from group to group as they crouched shivering together in knots, cheering them and reminding them of the relief which would no doubt come with the daybreak ; and coffee, tea etc. were brought round by some of the gentlemen. Late at night, Mr. Kaye engineer of the Cadell was rowed over to the island and made his way on foot to Goolwa with instructions from Captain Johnston to have the “Queen of the South” in readiness in the morning. The Queen reached the mouth at about 7.00 am. And no sooner than was desirable, for the Cadell had drifted about one mile from the first line of breakers. The passengers were transshipped and much relieved by finding that a store of provisions had been thoughtfully provided, including a supply of milk for the little ones, sent by Mr. Wauchope, the traffic manager. So powerful was still the tide that in attempting to tow the Cadell, the Queen was dragged ashore herself but was shortly released from her perilous position, and, leaving the former with a full crew and a sufficiency of anchors and cable, she steamed to Goolwa where she arrived at about 11 am. Tuesday. The passengers were weary, damp and cold, and very glad to reach their homes. The Cadell’s engines having been placed in working order, she also arrived at about 5.00 pm. no worse for her journey.

The entertainment which would have taken place on Monday evening but for the accident detailed above took place on Tuesday. The chapel was as well filled as the character of the night might be expected to allow. The “help-one-another” society sang songs and choruses, and gave recitations, and Mr. Read’s lecture on “the life and doings of a famous Scotsman” was well received.