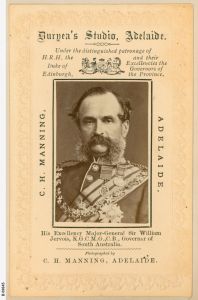 Captain Johnston, whose many deeds of bravery in saving human life, have gained for him such an enviable and wide spread reputation, not only in this country, but in England was made the honoured recipient of the Royal Humane Society’s medal at the hands of His Excellency Sir W.F. Jervois CB. KCMG. The presentation took place on Wednesday afternoon, January 30th at the Treasury in the presence of the Hon. W. Morgan, the Chief Secretary, who introduced Captain Johnston to His Excellency, remarking as he did so that he was only surprised that the Royal Society had not sent their medal before.

The force of that observation will be seen after a perusal of the following list of persons saved by Capt. Johnston - John Barclay and Capt. R. Ross at Goolwa in 1854, Capt. Ross again at the Murray in 1856, James Barclay at the Murray in 1857, Miss Angel and Mr. Opie at the Murrumbidgee in 1858 ; W. Arnot in 1859, a miner in 1860, George Pybus in 1862 and a seaman in 1863, all four of these off the steamer Albury; Mr. Acres in 1871 at the Darling ; Mrs. and Miss Padman in 1876 at Port Victor. Besides these rescues, Capt. Johnston also rescued two aboriginals from drowning which brings up a grand total of fifteen lives he saved. The rescue of Mrs. and Miss Padman which occurred in February last and must still be fresh in the memory of all newspaper readers in this country, was the stimulating cause for efforts being put forth to secure the Royal Society’s recognition of such unusual bravery. His Excellency in presenting the medal, expressed his high gratification at being the channel through which it was conveyed to Captain Johnston, especially when he considered the great number of lives he had saved from drowning. He [Capt. Johnston] had distinguished himself in a very high degree and His Excellency could not recall to mind any who had so greatly distinguished himself for bravery and presence of mind.