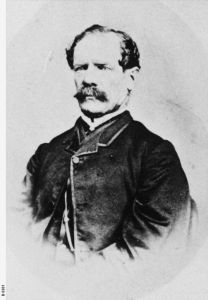 Part of a letter written by Sir George Ritchie, son of James Ritchie.

Lioness, an iron ship of 75 tons register, fitted up as a paddle tug cost 5500 pounds in Liverpool and was purchased by Captain Cadell’s father. After her arrival in Melbourne she was sold within a month to Cole’s Wharf Co. of Melbourne for 21000 thousand pounds. Before leaving Liverpool for Melbourne she was dismantled by removing her paddleboxes, paddle wheels, shafts and guards, funnel and other superstructure which were stowed down below. She was then rigged as a barquentine, consisting of three masts, square rigged on the foremast and fore and aft rigged on main and mizzen and otherwise made seaworthy.

When ready for sea, although there were many in the old land anxious to get to Australia on account of the gold rush, a crew could not be obtained for so small a craft with such a long and perilous voyage ahead of her. Cadell was acquainted of this fact so he obtained a crew from Cockenzie. His hometown was Tranent which was three miles inland from Cockenzie, and connected by a tramway. Cadell owned rich coalmines in this vicinity and he was considered the squire of the village.

The captain in charge of the Lioness was Captain John Kay; chief officer - Robert Ross. These were the only two on the ship who were on wages. The other members of the crew were - John Avery, the cook and before the mast [all men employed in Cadell ships] were George Johnston, James Ritchie, John Barclay, John Ritchie and William Barber.

The latter five members of the crew were on the articles at one shilling a month. One of the crew who was a smoker was two shillings and sixpence in debt for tobacco on arrival in Melbourne. They were 114 days on the voyage. She had a small cargo consisting ten tons of coal and ten tons of flour. There were also three passengers aboard - George Gibson, an engineer, James Alexander and Alexander Alexandra, cousins of the above. The two latter were sons of men in Cadell’s employ.

Before leaving, the Lioness was three days in Liverpool adjusting her compass. They left Liverpool on 8th February 1853 and arrived in Melbourne 1st June thus being 114 days on the voyage. After leaving the English Channel, [for Melbourne], the first land that was sighted was Cape Otway – off Melbourne. This was considered a wonderful piece of navigation in those days.

Before leaving, the lower plank around the bulwarks was removed from stem to stern, and hung on hinges to enable the water to get away freely in the advent of flooding the decks and one of the party told me that this saved them as they met some heavy weather through the voyage, though the trip on the whole was a fine one. Only one night was the sea too heavy to drive into it, and so they lay “hove to” for that twelve hours and she proved to be a splendid little seaboat. Francis Cadell of early River Murray fame, was a son of Hugh Cadell, of Tranent, and a radical. First went to sea and rose to the rank of lieutenant, he was discharged for disobeying orders. When he returned home his father gave him a fresh start by giving him charge of a full rigged ship, the Queen of Sheeba. Frank brought her out and that was his advent to Australia. He loaded her with wool and sent her back to England, and this as far as we know, was the end of her Australian experience. He took command of the S.S. Cleopatra, and remained for a time master of her. After this he went to Sydney and built a canvas boat, took it to Albury, and came down to Goolwa in 1853. This was his first association with the River Murray. He returned to Sydney and built the Lady Augusta and steamed her around to the Murray mouth, the first time it was navigated by a vessel of any size. On the way around to Goolwa, the Lady Augusta called in at Melbourne for provisions. Cadell was not on her but was sending her around and afterwards joined her at Goolwa and made the eventful voyage up the Murray as far as Swanhill in Victoria. [Letter ends]