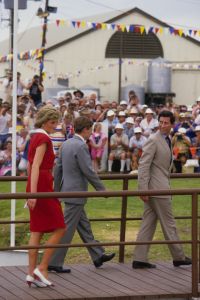 The day dawned, hot and windy – one of those few days when Goolwa could be really unpleasant. Was it really necessary to give our Royal Couple such a warm welcome?

Nevertheless our neighbour Al donned blazer, tie and RSL badge, proud to be one of the Guard of Honour* for Prince Charles and Princess Diana when they boarded the “Mundoo” for a short luncheon cruise. 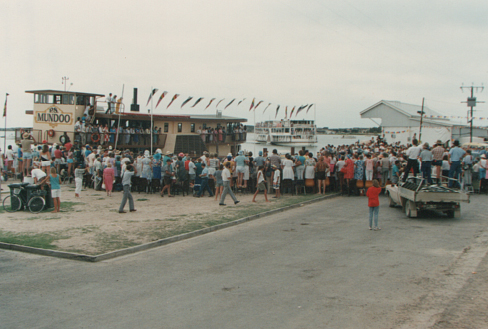 In front of that curious new construction, Signal Point, there were bunting, barricades, a temporary stage, milling crowds and a group of partially disabled citizens already sitting in the hot, dusty enclosure.

Excitement and discomfort grew. There were two buses of media crews. It was rumoured there were frogmen on the river. Helicopters buzzed about. When would the Cockle Train steam in?

At last, somewhat overdue, THEY arrived. Prince Charles, elegant as always. Princess Di looking hot in red. Later we learnt the air-conditioning in their vehicle had given up mid-way between Government House and Victor Harbor. Then they had travelled by train to Goolwa. What joy to be a VIP when it’s over the old century with a north wind as well! 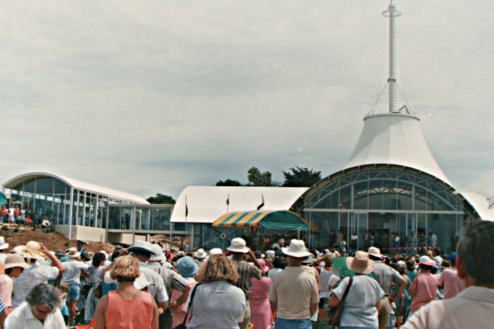 After the formal opening ceremony where Prince Charles played a little politics in support of the Steam Railway, neighbour Al’s big moment came. THEY walked past the Guard of Honour to the waiting “Mundoo”, Princess Di making his day with her comments.

She soon appeared on deck, standing like the mast-head seeking a breath of cooling air.

Then on to the West Park complex where there were more official ceremonies. And our other former neighbour, Mrs. Nora Hopgood was thrilled by the Princess’s natural charm.

We watched the TV news coverage – from Channel 9 to 7 to 10 and 2. There was Goolwa on the evening news, taking national, if not international, stage for the day. Usually one had to spell it, expect to receive mail addressed to Gawler 5214, or respond to the query – “where’s that?”

Thank you to Alamy for permission to use the photograph of Princess Diana and Prince Charles.

*The Guard of Honour was provided by members of the 1836 Adelaide Royal Marines.